Who Needs a Prenup? 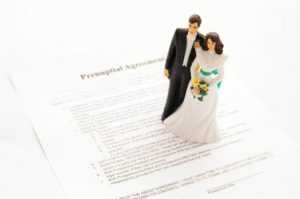 Many people believe prenuptial agreements are only for the wealthy with substantial assets to protect, but the truth is that a prenup can be used strategically for circumstances that have nothing to do with money:

If you own or start a business. In many states, a business started during a marriage is considered community or marital property, which means that it is owned by both spouses and will be divided if they divorce. If the business began before the marriage, but grew substantially during the marriage, its appreciation in value is also considered marital or community property and will be treated as an asset in a divorce.

A prenuptial agreement can be used to plan how an existing or future business will be treated in the event of a divorce. This can save a lot of headaches and expense. If a divorce occurs without a prenup, and there is a substantial business asset, there will have to be a valuation done of the business. Typically, each side gets their own expert to perform a valuation, and the results can vary greatly. Then a judge must decide which expert to believe. In some cases, it is entirely plausible that the entrepreneur would either have to sell the business to give his or her ex their share, or, if the business can’t be sold, will have to give up all of the marital assets to an ex in lieu of their share of the business.

If you move to another state. State law determines divorce law, and each state has a different set of rules for how support and property is handled. It doesn’t matter if you have married and lived in one place for many years; if you move and then decide you want a divorce, your new state of residence determines how your divorce will be handled.

With a prenuptial agreement, a couple can predetermine alimony amounts and property distribution, no matter where they live at the time of the filing. If the couple lived in New Jersey and one of them inherited a substantial sum, that money would be considered the sole property of the spouse who inherited. However, if they moved to Connecticut, that inheritance would be considered marital property and the inheritance would not be protected.

If you have children from a prior marriage. A prenup is not only used to plan for divorce; it is also used to plan for the death of a spouse. This is especially important for those marrying for a second or third time, with children from prior marriages that you want to inherit your assets. Even if you keep your assets separate from your new spouse and don’t add to those assets during your marriage, your children may still not receive the inheritance you wanted to leave for them.

New Jersey does not allow for a spouse to be disinherited unless the spouse consents to it. If you do disinherit, your surviving spouse can petition the court for their elective share of your estate, which is roughly one-third of the entire estate. A prenup can be used to provide a right of election waiver, saving your assets for your chosen heirs.

By handling cases with the dignity and respect they deserve, we have helped many families in New Jersey civilly resolve their divorce, rebuild a satisfying life, and confidently step into the next chapter of their lives. Contact us today for your free consultation.

Ways to Invalidate a Prenuptial Agreement in NJ
January 15, 2020

6 Mistakes to Avoid in a Prenuptial Agreement
December 16, 2019

What Issues Can Be Addressed in a New Jersey Prenuptial Agreement?
September 9, 2019

How to Ask Your Partner for a Prenuptial Agreement
June 5, 2019